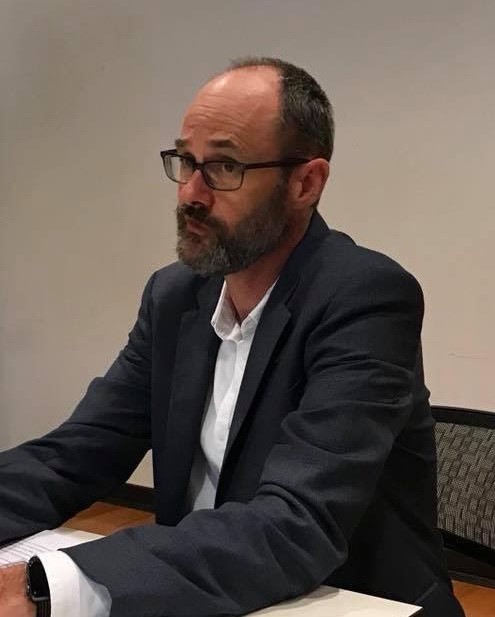 Daniel Botsman is an historian of Japan, whose interests span the period from the 17th century to the present, with a particular focus on the social and political transformations of the 19th century. He was educated at the Australian National University and Oxford University, and received his PhD in History at Princeton. Before coming to Yale he taught in the Faculty of Law at Hokkaido University and in the history departments at Harvard University and the University of North Carolina, Chapel Hill. His publications include Punishment and Power in the Making of Modern Japan (also published in Japanese under the more colorful title, Chinurareta jihi, muchi-utsu teikoku—“Blood Drenched Benevolence and the Empire that Flogged”). After analyzing the evolution of penal practices and law during the centuries of samurai rule that preceded the Meiji Restoration of 1868, the book examines the rise of the modern prison system in Imperial Japan. In so doing it aims to illuminate the underside of the country’s “successful” modernization, while also revealing the deep connections between modern ideas about prisons, punishment and civilization and the global history of imperialism. Botsman is also translator of the memoirs of Okita Saburō, one of the architects of post-war Japan’s “economic miracle”, and has recently co-edited two collections of essays (in Japanese and English) responding to the Japanese government’s efforts to celebrate the 150th anniversary of the Meiji Restoration in 2018.

Botsman’s current research interests include the history of caste and
“outcaste” people, animal-human relations, and the impact of ideas about race, slavery and emancipation in modern Japan. Together with Adam Clulow (UT Austin) and Xing Hang (Brandeis), he is part of an ACLS funded research team exploring the large-scale trade in deerskin that developed between Japan and South-East Asia in the 17th century. He also has a strong interest in urban history, and has recently begun work on a new project about the history of Tokyo with a team of collaborators in Japan and the US, including Yoshida Nobuyuki, Sakurai Ryōju (Reitaku), Michael Thornton (Yale) and Sabine Fruhstuck (UC Santa Barbara).

Since coming to Yale in 2010, Botsman has developed a strong interest in the history of the university’s deep connections to East Asia, and the remarkable collections of archival materials available in the university library for the study of all aspects of Japanese history. In 2015 he collaborated with Ed Kamens, Haruko Nakamura and Kondō Shigekazu (University of Tokyo) to mount an exhibition of pre-modern “Treasures from Japan” held in the Beinecke library. He also regularly teaches an undergraduate seminar called “Yale and Japan”, in which students develop research projects using the university’s archival collections, as well as a class on reading “Japanese Historical Documents”, such as the Beinecke’s “Kyōto Komonjo Scrolls.”