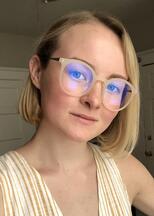 Holden Zimmerman is a second-year Ph.D. student in International History with a regional specialization in Western Europe and Japan. Her research focuses on the relationship between humanitarianism and militarism in the late 19th and early 20th centuries.

Before coming to Yale, Holden spent a year in Fribourg, Switzerland as part of the Rotary Youth Exchange Program, after which she attended the University of Kansas where she completed her BA in History and German studies, with a portion of the degree spent at the University of Bonn and at Kanagawa University.  While still at KU, she was also awarded a FLAS for the study of Japanese that enabled her to pursue an MA in History. She welcomes any inquiries about the graduate program in History at Yale.

Holden will be away from Yale during the 2020-2021 academic year while participating in the Inter-University Center’s 10-Month Intensive Japanese Language Program in Yokohama, Japan.