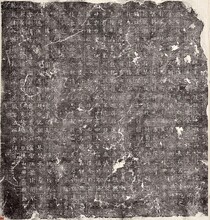 The high mobility required by government service meant that Tang elites were no stranger to long-distance travel. Because most Tang officials would bring their immediate family to their new post, it was inevitable that they or family members might die while traveling or sojourning abroad. As familial joint-burial was the norm and an indicator of social respectability, whether a family returned a loved one’s remains to the family graveyard for burial was closely scrutinized. Families therefore increasingly turned to entombed epitaph inscriptions (muzhiming) to explain delays or demonstrate moral fortitude in conducting the familial joint-burial. This talk examines several muzhiming describing the extreme hardships families faced in repatriating a loved one’s remains. In so doing, it highlights one often overlooked aspect of studying muzhiming—that the dead were not the sole focus of commemoration. The family and other content producers often inserted themselves into the narratives of the deceased’s life and death, emphasizing their own emotional attachment to the dead and involvement in the burial. By relating the tribulation they endured to complete the “great matter,” they boasted of their filial and familial devotion; in some cases, their achievement even supplanted the memory of the deceased in the muzhiming. In deft hands, such “conspicuous suffering” could also allow the family to shift attention from the outcome to the process of their endeavors, thereby shielding them from public censure if they failed to complete the familial joint-burial. The talk thus illuminates how figurative “conspicuous suffering” served as a rhetorical device for managing real-life public perceptions.————————-Jessey Choo (Ph.D., Princeton) is Associate Professor of Chinese History and Religion at Rutgers University-New Brunswick. As a historian specializing in China’s medieval period (200–1000 CE), her research centers on cultural and religious practices related to childbearing, death, and memory, as well as women’s acquisition and exercise of personal agency in everyday life. Her first book, Inscribing Death: Burials, Representations, and Remembrance in Tang China, 618–907 CE (University of Hawaii Press, 2022), explores how people in late medieval China used burial and entombed epitaph inscriptions (or muzhiming) to fashion and preserve the identities and memories of the dead, themselves, and their families. She is currently working on two book-length monographs. The first, “From Damnation to Transcendence: Childbearing and Women’s Salvation in Chinese Religions, 1000–1500,” traces the rise and popularization of a Buddho-Daoist soteriology centered on childbearing. The second, with Alexei Ditter, “Immortalized in Stone: Memory Making in Late Medieval China,” theorizes memory practices in late medieval China by examining how, through constructing, circulating, and consuming muzhiming, people generated and manipulated memory. She is also a co-editor of Early Medieval China: A Sourcebook (Columbia University Press, 2014), and Tales from Tang Dynasty China: Selections from the Taiping Guangji (Hackett Publishing Co., 2017). Her research has been supported by multiple grants and fellowships, most recently the Chiang Ching-kuo Foundation for International Scholarly Exchange Scholar Grant (2018–19) and a fellowship from the Morphomata Center for Advanced Studies in the Humanities at the University of Cologne in Germany (2019).